Scan of a Scan

Scanning a Scan of a Person? Why?

Using some freely available data from the Artec-Group website, I wanted show others how to use Scanner-Killer using a virtual environment to learn how to calibrate and scan. Using a virtual scene gives you allot of freedom to test and play with Scanner-Killer without having to buy expensive equipment. It also shows you the limitations and benefits of Stereo Photogrammetry.

I used  3DSMax to simulate a 16 Camera Array, well 18 if you include the Ceiling Pod (in the past, xyz-rgb have set-up a similar system IRL using 24 Cameras!) Using this virtual scene it will allow us to evaluate the costs of actually doing this in the studio and simulate whether it will work or not. If it does (which it did!) it means you can do a full body capture in under 1 second with about 10 minutes to process the data. Compare this to the actual Artec Scan from Artec-Group, which according to their website took about 20 minutes to capture and 3.5 hours to process! The benefits are clear. Artec MH scanners are also costly, £10K+ compared to a 16 Camera Single Shot System for under £8K.

Here is an example of how the cameras are arranged in 3DSMax, 16 around the Subject and 2 above for a total of 18, 9 “Pods”

We split them into top half and bottom half for increased resolution both in Mesh density and texture resolution, yielding on average 18MP per capture slice, resulting in a very big texture file when everything is merged.

This is enough to cover a full 360 of your subject matter to be scanned in one single capture. Of course using 3DSMax we have to render each frame out one at a time. But in reality it would be a press of a button. Each Pod is calibrated using a virtual checker board. In the scene there are 4 Virtual Lights (in yellow) and 4 Virtual Noise Projectors (in green) to mimic Digital Projectors. We project a Noise pattern onto the Subject. 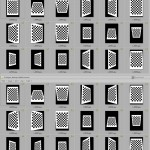 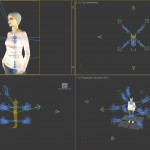 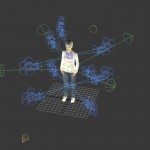 Each Camera was rendered and processed one by one with the SK software. If you have SK Pro you can do this in bulk with one button, as well as have the ability to export out 3 sets of Disparity maps which are useful for other processing techniques later on (although this option might be included in SK Core?)

Each capture frame and an example Edge Cull map from the generated Disparity maps. 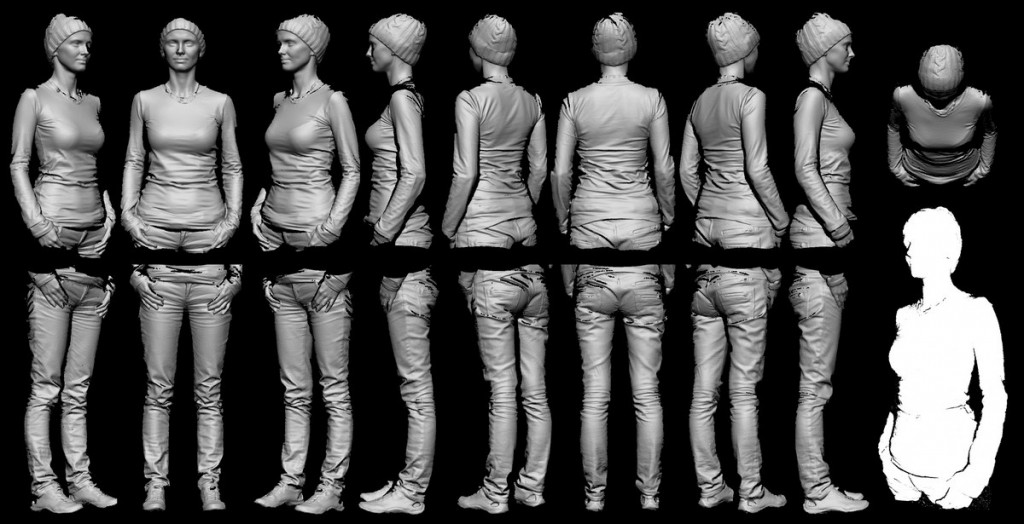 Each Capture slice was loaded into ZBrush, then using the 3rd Disparity Map we are able to clip the edges of unwanted and stretched artefacts using Masking. Before this was a manual process and very time consuming but this technique saves the hassle!

All we have to do now is align them all! No easy task but possible. Using a 3rd Party application like Mesh Lab these capture slices can be Rigidly aligned very easily.

For this example I used Artec-Group software to quickly align all 17 Captures into one Closed Model. The next stage is some cutting and fusing the data.

Comparison between the original Artec Scan and the synthetic SK Scan

Even just using Rigid Registration the results are pretty good, there are some anomalies due to Calibration inconsistencies but these tests prove that a single shot capture system comprising of 16+ Cameras (8 Pods) is a worthy endeavour. Reducing capture times down to under 1 second from 20 minutes! Dense detailed Meshes + 36MP full colour = Pretty, pretty good! 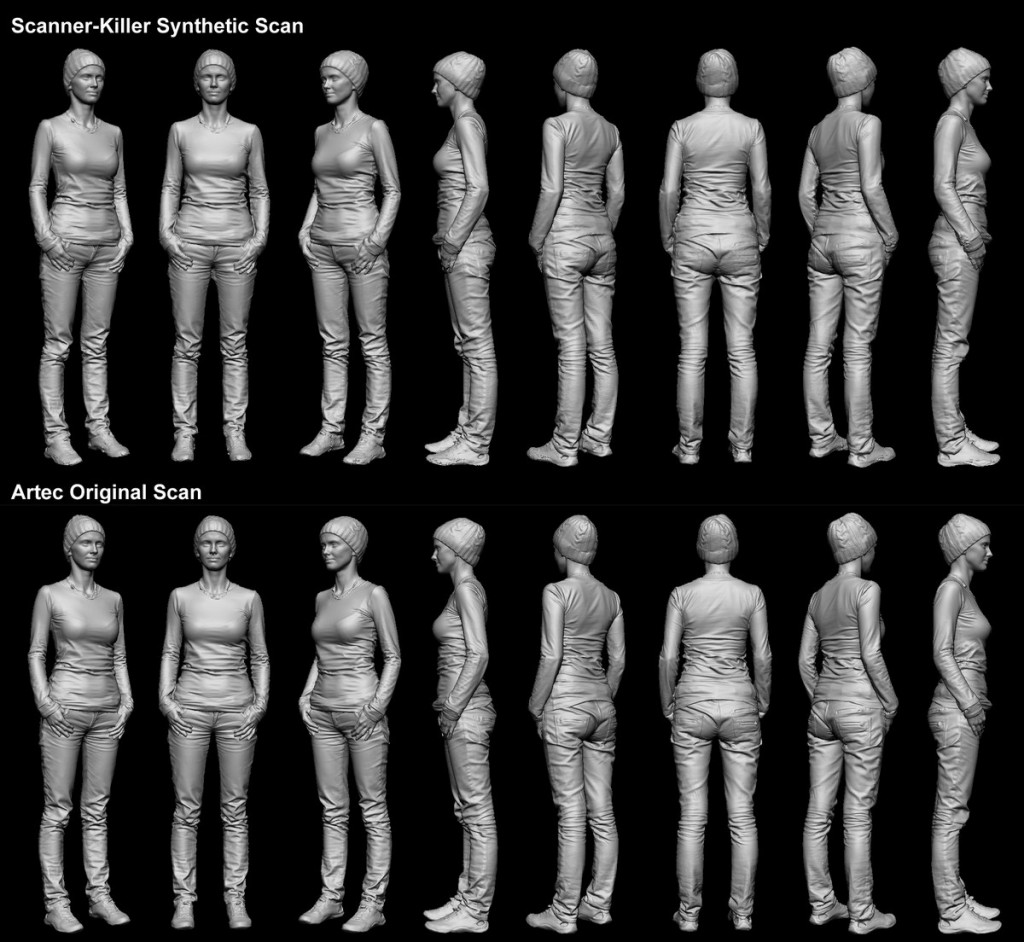 There is no doubting how superb the original Artec-Group scan is, the hardware is incredible but the capture times, processing times and low colour resolution are a slight drawback. I still own an Artec MH and cannot recommend them highly enough.

The SK scan lacks some detail and there are some fusing issues but with Hao Li’s Non-Rigid Registration all these problems should be addressed.

So in short, these are tests you can do now! in pretty much any 3rd Party Software like Modo, Softimage, Maya, 3DSMax, Lightwave etc combined with an SK License your all set to learn the work-flow and get scanning in Real Life!

Working with Hao Li, we plan to post some Non-Rigid Registration tests later this week. Updates to follow.